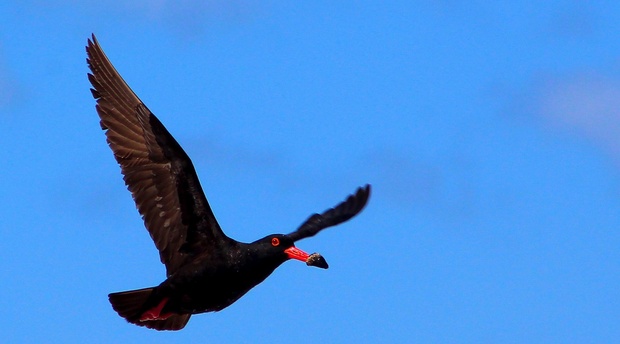 The African black oystercatcher is a rare and unusual bird. But conserving them isn’t only about them: it’s about the marine environment as a whole.

The research suggests that only about 6,700 African black oystercatchers survive in the world today - although the experts seem a little unsure about their conservation status.

According to L.G. Underhill, “The African Black Oystercatcher Haematopus moquini occurs in southern Africa, breeding exclusively in Namibia and South Africa. The non-breeding range extends into Angola and Mozambique. The population size in the early 2000s is estimated to be 6,670 birds, an increase of 46% since the early 1980s, and continues to increase. The breeding range is expanding eastwards, into KwaZulu-Natal. The increase in population size is attributed to the invasion of the southern African shoreline by the Mediterranean Mussel Mytilus galloprovincialis, better conservation management of the offshore islands and a ban on off-road vehicles driving on beaches in South Africa.” (Underhill, L.G. 2014. Assessment of the conservation status of African Black Oystercatcher Haematopus moquini. International Wader Studies 20: 97–108.)

But birdlife.org says that “This species is listed as Near Threatened owing to its small population and hence almost qualifies for Vulnerable under criterion C1. The current population trend is unknown, but if the species is found to be in decline it might qualify for a higher threatened category.”

So why should oystercatchers be conserved?

Oystercatchers are incredibly sensitive to any disturbances in their environment - so their presence or absence can be used as a barometer of an area’s general state of health. Conserving the oystercatcher thus benefits the coastal environment as a whole.

Lifestyles of the rich and famous

The African black oystercatcher was first described to science in the mid 1800s by Bonaparte, who named it Haematopus moquini after the director of the botanical gardens in Toulouse, France - one Horace Benedict Alfred Moquin Tandon.

They’re usually found in pairs or small groups on sandy or rocky shores, and sometimes also on estuaries (they’re quite common on the Knysna Estuary). They feed mainly on mussels and limpets, but will also take whelks, small crustaceans, and various worms.

Oystercatchers nest in summer on rocky or sandy beaches, often near the high water mark, and lay one or two eggs in a shallow scrape - they don’t make proper nests, but they do try to lay their eggs in camouflaged positions or in a raised place where they can see approaching predators.

Unlike the juveniles of birds such as the plovers, young oystercatchers aren’t able to feed themselves when they hatch, and need to be fed by their parents until well after fledging.

In order to maintain the population size, each breeding pair would need to raise only one chick every three years. Under the present circumstances - especially on mainland beaches and rocky shores - this target may be difficult to attain.

Oystercatchers are territorial and faithful to their mates, and some pairs have been recorded as using the same nesting sites for up to 20 years.

Threats to the Oystercatcher’s breeding success

Because they nest in areas that are popular with man - and in summer when the beaches are most popular - the young are often greatly at risk.

Many human activities contribute to this. Beach-goers walking their dogs, anglers, drivers of 4X4s (although this is illegal now on South African beaches), and coastal development all contribute to the high mortality rate.

The question of 4x4s on the beaches often raises the ire of the owners of these vehicles - but In his 1997 article, ‘African Black Oystercatcher - Between the Tides,’ the late Phil Hockey wrote that ‘there is an interesting and alarming correlation between a decrease in the breeding success of oystercatchers and an increase in the sales of 4X4 vehicles in South Africa.” (Africa Birds and Birding Volume 2 Number 5; Black Eagle Publishing, Cape Town )

When an oystercatcher is disturbed, it may abandon its nest long enough for the eggs or chicks to die in the heat of the sun, or to be preyed upon by other birds (particularly by kelp gulls). The eggs and chicks are easily crushed by vehicles on the beach, and the helpless chick is no match for curious and uncontrolled dogs.

The Percy FitzPatrick Institute of African Ornithology at the University of Cape Town includes the African black oystercatcher in two of its long-term research programmes:

As the Oystercatcher Trail, we’re completely committed to the conservation of both oystercatchers and their coastal environment.

Walk with us, and you’ll agree - it’s a cause that’s well worth pursuing.

This great short doccie was shot on the West Coast (Grotto Bay Coastal Nature Reserve)- but it's worth watching for those of us on the South Coast, too! 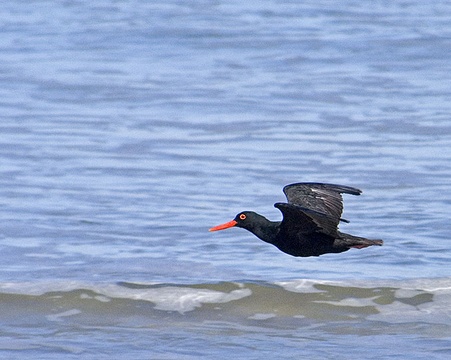 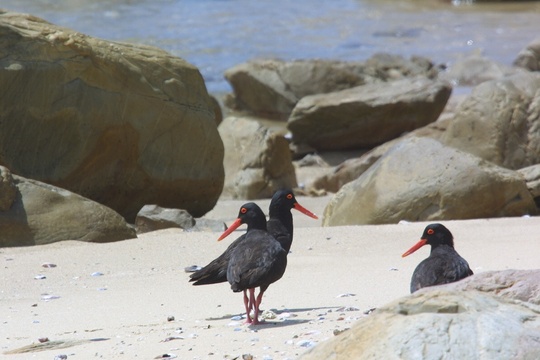 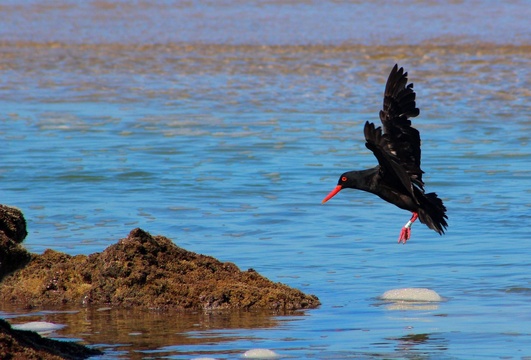 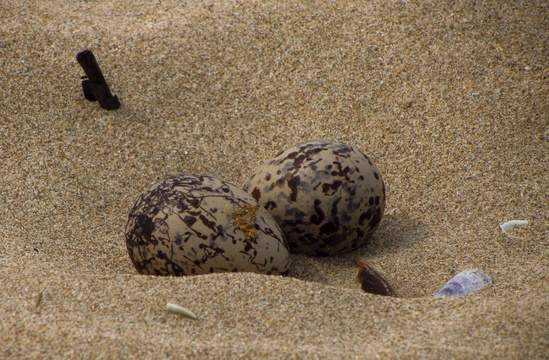 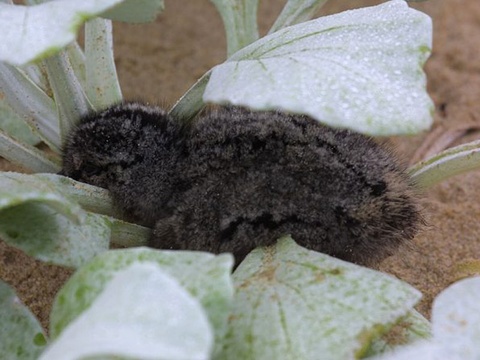 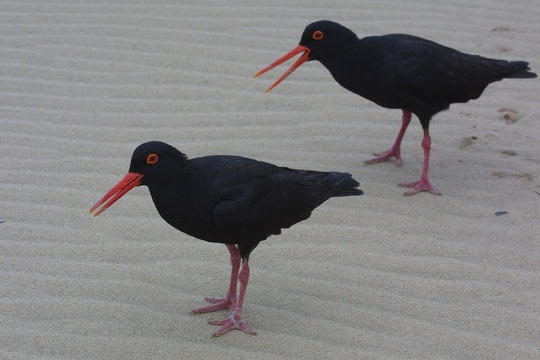 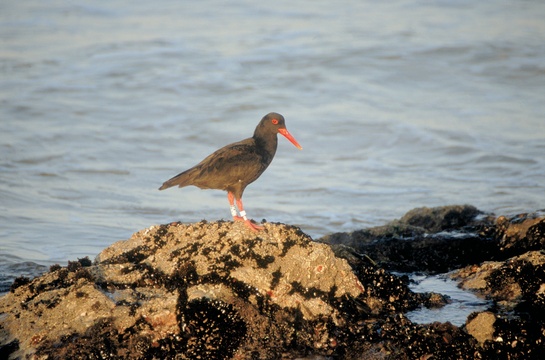 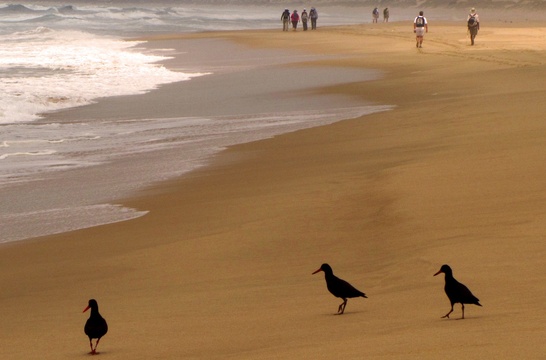 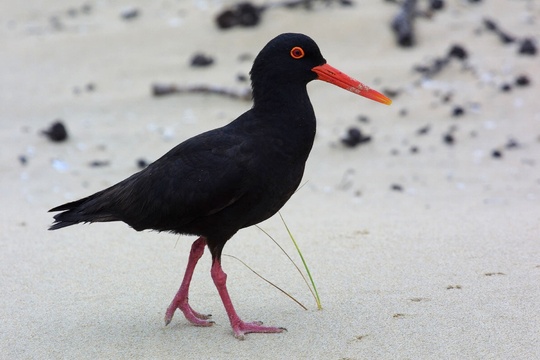 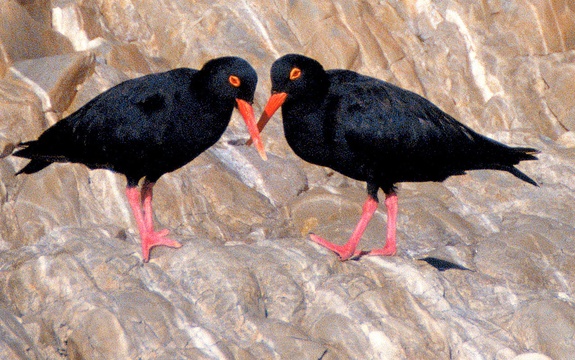 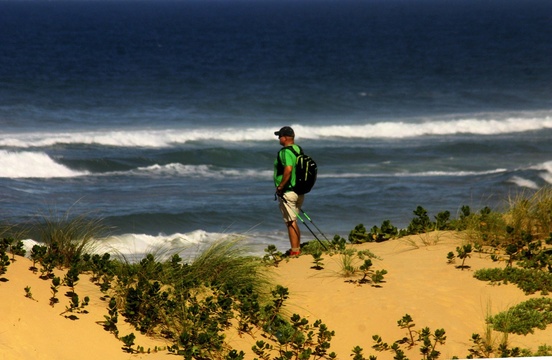 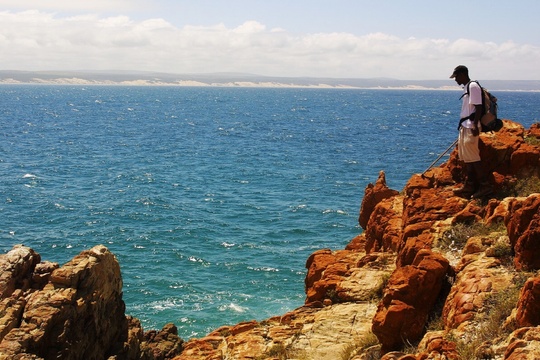 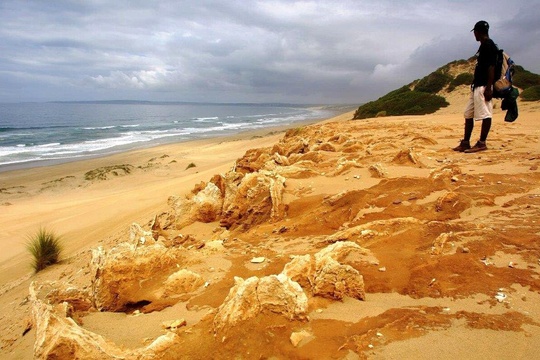 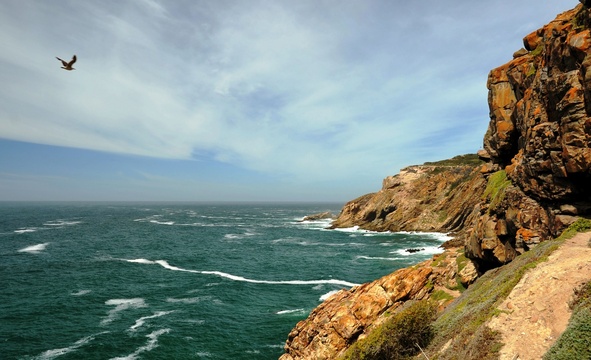